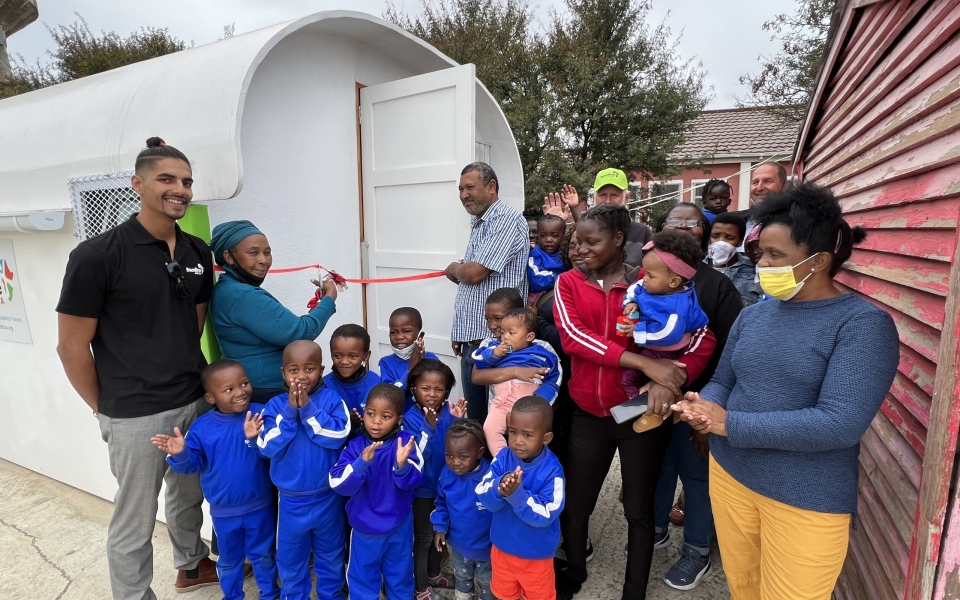 The Breadline Africa team joined Lizzie Mathiso, the principal of Sijongephambili Créche in Strand, Western Cape for a huge celebration on Friday 29 April 2022 as her new, upgraded pre-school facilities were officially launched. After the children impressed everyone with their enthusiastic singing and dancing, Lizzie took the time to share her story. In December […] On Thursday, 7 April 2022, children, staff, and parents of Phathekile Pre-school, located in Hlolweni in the Winnie Madikizela-Mandela Municipality in rural Eastern Cape, received a new school facility from the Industrial Development Corporation (IDC) of South Africa Limited. Phathekile Pre-school was established in 2010 by a parent, with help from a former primary school […] There was much to celebrate on Wednesday 23 March, when the Breadline Africa team handed over its first 44m² sandbag and ecobeam structure consisting of a kitchen, an office as well as a large classroom area to Ilithalethu Educare Centre in Khayelitsha, Western Cape. While the sandbag building technique is not new, it is a […] It takes more than a pandemic to stop the celebration of the placement of new infrastructure, and on 16 February 2022, the Breadline Africa team joined the festivities at Sophumelela Educare Centre as they launched a new 6-metre container classroom. Due to COVID-19 restrictions, the donors were not able to attend, but the team made […]

Seven Steps Academy for the Deaf Situated at the foot of Table Mountains, beneath the well-known cable car lies Seven Steps Academy for the Deaf. This incredible school is one-of-a-kind in the Western Cape and supports children who are Deaf or hard of hearing. With the help of individual donors, Breadline Africa was able to contribute to a much-needed prefabricated creative […]